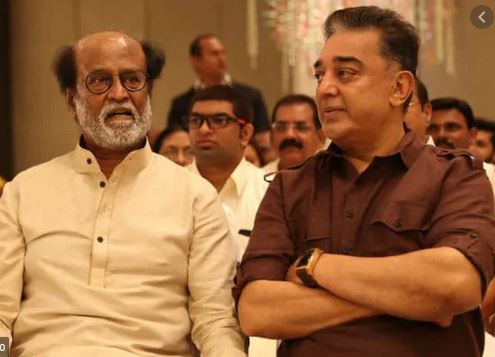 Cheenai  :  As Tamil Nadu is headed for elections in May next year, Kamal Haasan became the first politician to start his campaign, much before the AIADMK and DMK leaderships. And, he has already sent out a message that he would be happy to join hands with Rajinikanth’s proposed outfit, if their ideologies match. But for Rajinikanth fans, it is not a great idea at all.

What did Kamal Haasan say?
Haasan said he was open to alliance talks with Rajinikanth, who is expected to launch his new party in January 2021. “Like me, Rajinikanth is also fighting for change. But he is yet to talk about the ideology of his party in detail. Let him reveal more. We are just a phone call away. If it is feasible to work together, we will definitely consider that without any ego,” Haasan said.

The power of Kamal Haasan’s party, and prospects of Rajinikanth
Haasan’s Makkal Needhi Maiam (MNM) is currently standing for elections alone. In the 2019 Lok Sabha polls, his party secured 3.77 per cent of the votes. Haasan’s attempts to strike an alliance with DMK before the General Elections had failed. There were also reports the actor had reached out to Congress leader Rahul Gandhi to enter the DMK alliance, which proved to be a difficult plan as DMK had told the Congress to share its seats from the alliance with Haasan.

Ahead of Assembly polls, Haasan is now being called the B-Team of the BJP due to his decision to, once again, contest alone. Unlike Rajinikanth, Haasan’s support base also includes the Opposition — anti-AIADMK votes — which would essentially weaken the DMK camp.

Meanwhile, it is estimated Rajinikanth’s proposed outfit will have to struggle to get a two-digit vote share for many reasons, including a much delayed party launch. Rajinikanth is yet to name his party and pick a symbol, and he is yet to begin campaigning on the ground. Further, his party leaders and district functionaries continue to be the unheard office bearers of his fans association.

Also in Explained |What does Rajinikanth’s political plunge mean, ahead of Tamil Nadu polls?
So, together, Haasan and Rajinikanth are expected to secure a maximum 10 to 15 per cent vote share in the upcoming polls.  Kamal Haasan with Rajinikanth in

Why do some BJP leaders endorse the idea of a Rajini-Kamal Haasan combo?
Rajinikanth, a “mass hero”, has a big fan base in Tamil Nadu. However, it is unclear how many votes this will translate to, especially as he is seen as a “BJP man” in the state.

Haasan, on the other hand, has never had a fan base like Rajinikanth’s. But, he has projected himself with the image of an atheist, a rationalist with a strong lineage to the Left and Dravidian ideologies.

A senior BJP leader said both actors joining hands would create a powerful third front in Tamil Nadu. This is because it is estimated that about 70 per cent of the votes secured by Rajinikanth’s party would be from traditional AIADMK and BJP camps. But, the BJP leader said that doesn’t matter. “This election is nothing for us. Amit Shah’s statements were clear during his last Chennai visit; we are working for 2026, when BJP will be the main opposition to DMK.”

While Rajinikanth is also expected to garner some Dalit votes, what makes Haasan’s MNM an interesting entity for the BJP is the urban votes he secured in the Lok Sabha polls — over one lakh votes each in Coimbatore and three constituencies in Chennai city. While he failed to catch the imagination of the rural population, he did secure a comfortable share of votes from pockets known to comprise upper caste Hindus, in spite of his Dravidian, left, rationalist image.

Why do fans hate the idea of an electoral alliance between Rajinikanth and Kamal Haasan?
Keeping these electoral combinations apart, fans of the two actors may not be excited about an alliance. Even if Haasan’s fans agree, Rajinikanth fans, who consider Haasan to be lesser than their superstar, oppose the idea.

Speaking to The Indian Express, an office bearer of Rajinikanth’s fans association said Haasan, by proposing the idea of an alliance, was actually exposing his vulnerable position. “Why should my leader join hands with him? Our people are different, we are not atheists or Periyar fans like him (Haasan),” he said.

leader of Rajinikanth, who runs a website for the actor, questioned Haasan’s proposal. “When Rajinikanth is going to be a tsunami in this election, what is the necessity for a smaller wave like Haasan’s party? If at all there are people to join Rajinikanth’s alliance, it would be like-minded people and parties like G K Vasan’s Tamil Maanila Congress or Pattali Makkal Katchi (PMK),” he said.