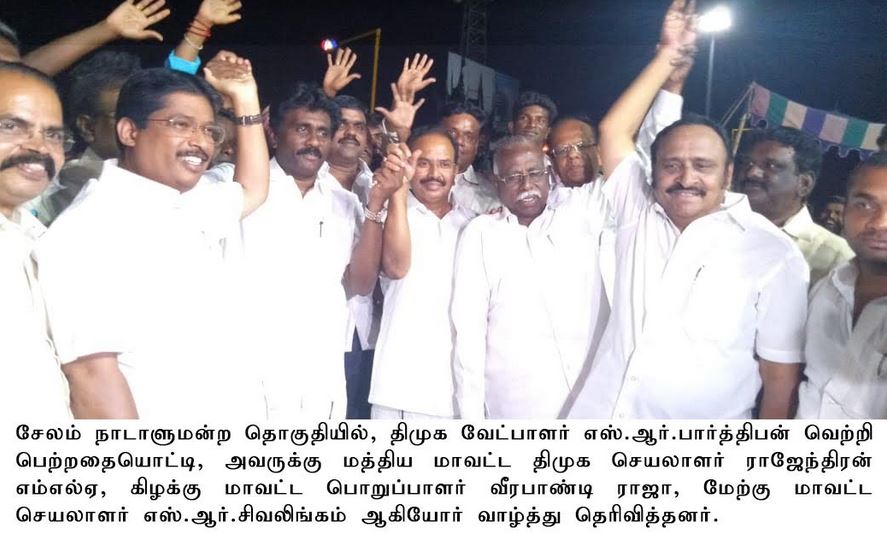 DMK candidate wins Salem Parliamentary Constituency with 1.46,926 vote margin
Salem
In the result for the Chief Minister’s native constituency Salem, DMK candidate S.R.Parthiban has
won by a margin of 1, 46, 926 vote margin.
DMK alliance has seized Salem constituency after a gap of 10 years as in the last two consecutive
terms, the AIADMK retained the constituency. In the 2014 general elections, V.Paneervselvam of
AIADMK won with a margin of 2,67,610 votes.
The former DMDK MLA representing Mettur during the period 2011-2016, S.R.Parthiban joined the
DMK before the last state assembly election.
In the first round result which was released after the counting started at 8.00 am at the Government
Engineerng College at Karupur, S.R Parthiban got 27, 348 votes against, AIADMK’s rival K.R.S
Saravanan who was 8,443 votes behind by getting 18,900 votes . M. Prabu Mankandan of Makkal
Needhi Mayam got 2423 votes while AMMK’s S.K S, Selvam got 2282 votes. NOTA option polled 698
in the initial round.
From the start S.R Parthiban took the lead and maintained it consistently. As counting progressed,
his margin increased from 3000 to 7,505 votes in the first two hours.
S.R Parthiban’s margin of votes over the AIADMK candidate widened more after the 10 th .round. In
the final 26 th .round, he got 60,6302 votes while AIADMK’s K.R.S.Saravanan got 4,59,376 votes.
Makkal Needhi Mayam’s M.Prabu Manikandan came third with 58,662 votes. S.K.Selvam of AMMK
who contested as an Independent got 52,332 votes. Among the smaller parties NTK’s A.Rasa got
33890 votes, BSP’s M.Sadayan got 3543 votes and Socialist Unit Center of India’s P.Mohan got 776
votes only. There were a total of 6575 postal votes and 17,130 NOTA votes.A total of 25
independents contested including S.K Selvam.
Out of total of 16,11,982 voters in Omalur, Edappady, Salem West, Salem North, Salem South and
Veerapandi assembly constituencies, 12,48,809 people (77.57 percent) voted in the election for the
Salem Parliamentary constituency held on April 18, 2019. 871 votes were rejected and there were a
total of 12,56,330 valid votes. 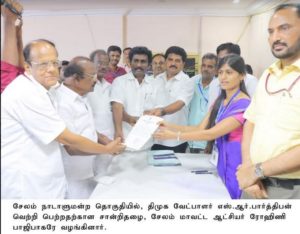