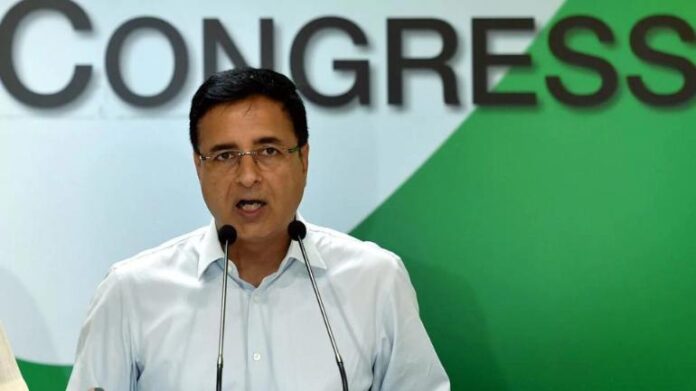 देश में अब महंगाई ही “इवेंट” है !
देश “महँगे मोदी-वाद” से पस्त और त्रस्त !
भाजपा की चुनावी जीत बनी “लूट का लाइसेंस” !
New Year Gift of BJP – India burdened by ₹1,25,407.20 Crore !
Modi Government’s ‘Mantra’ now is “ELECTORAL VICTORY IS A LICENSE TO LOOT”!
The diktat of the cruel, the cumbersome & the back-breaking ‘Price Rise’ imposed by Modi Government with effect from April 1st has shattered the budget of every household in India.
“MEHANGAI” is the biggest challenge to sustenance of every individual.
“MEHANGAI” is attacking the lives and livelihood of every household.
“MEHANGAI” is a curse in the life of every citizen.
BUT …
“MEHANGAI” is a “daily event” being celebrated to mock the people by BJP & Modi Govt.
BECAUSE … “Modi Hai Toh Yehi Mumkin Hai”!

As per Govt of India’s ‘Petroleum Planning & Analysis Cell’, consumption of Petrol in the year 2020-21 was 27,969 thousand metric tonnes. At a price increase of ₹7.20/litre the additional yearly burden on people comes to ₹20,138 Crores.

As per Govt of India’s ‘Petroleum Planning & Analysis Cell’, consumption of Diesel in the year 2020-21 was 72,713 thousand metric tonnes. At a price increase of ₹7.20/litre the additional yearly burden on people comes to ₹52,353 Crores.

When Congress-UPA government was in power Petrol and Diesel was at Rs 71.41 and Rs 55.49 per litre respectively, which have now been increased to Rs 102.6/litre and Rs 93.87/litre in Delhi.

4. Attack on Compressed Natural Gas (CNG): CNG is now the fuel of the common man – for autos, taxis, buses, trucks and for cars as people are unable to afford Petrol & Diesel. On April 1, CNG price was hiked for the sixth time in a month. A hike of 80 paise per kg has made CNG costlier by ₹4 per kg in the last month alone. It is now priced at ₹60.81 per kg in Delhi but varies upto ₹79.49/Kg in other cities. As per Government of India’s CNG consumption data of 2019-20, CNG consumption in India is 3,247 thousand metric tonnes. Based on this, year 2021-22 consumption of CNG is estimated at 3,500 thousand metric tonnes. At ₹4 per kg this month, the additional burden on people comes to ₹1,400 Crores.

7. Taxing Medicines – Taxing the Patients: Modi Govt has not even spared ill patients. The National Pharmaceutical Pricing Authority (NPPA) has announced a hike of 10.76% in prices of around 800 essential drugs from April 1st. Common Medicines like Paracetamol, Fever Medicines like Azithromycin, Ciprofloxacin, Metronidazole and other medicines for COVID-19 care, heart disease, high blood pressure, anemia, skin disease, minerals, vitamins will all go up. As per industry estimates, it will burden the ordinary consumer by ₹10,000 Crores.

8. Is owning a House – a mirage for Indians: Housing prices and construction costs have gone up 15% more in April due to rising cost construction materials such as steel, cement, bricks, copper, sanitary fittings, wood etc. Steel prices increased 30% from March 2021 to March 2022; cement costs went up by 22% copper and aluminum were up by 40% and 44% respectively in the same period. Steel prices have gone up from ₹35/kg to ₹90/kg. Cement bag has gone up nearly ₹100.

9. Tax deduction on Home Loan abolished: Section 80EEA to the IT Act which gave first-time homebuyers the benefit of an additional tax deduction of up to Rs 1.5 lakh on interest payment of a home loan has been withdrawn by Modi Govt.

10. Tax on PF Account: Your retirement money will now be in Govt’s pockets! From April 1, 2022, interest will be taxed for contribution of over ₹ 2.5 lakh in EPF account. Earlier, interest rates of Provident Fund were slashed from 8.5% to 8.1% impacting almost 6.7 Cr people.

12. Buying a Car, made costly by Modi Sarkar: The country’s largest carmaker Maruti Suzuki will announce another price hike. Maruti Suzuki has already increased prices four times since Jan 2021, totaling an almost 9% increase, the highest ever price hike introduced by the carmaker in a year. Tata Motors will increase the prices of its commercial vehicles by 2.5%. Toyota has announced a price hike of up to 4%. The third-party motor insurance is now costlier.

13. Prices of TV, AC, Refrigerator, LED, Mobile on ‘fire’: With affect from April 1st, Modi Govt has imposed a 30% duty on aluminum ore and concentrate, which is used in making Television, AC and refrigerator hardware. Apart from this, the import duty has also been increased on the parts used in the compressor, which will increase the prices of refrigerators. The basic customs duty plus a 6% reimbursement duty will be levied on the material used in making LED bulbs. Net consequences, that AC, TV, Fridge, LED Bulb prices will go by 15% and Mobile prices by 20-30%.

There is not a single sphere of a citizen’s life, where Prices have not increased.
Modi Govt remains responsible for this theft!