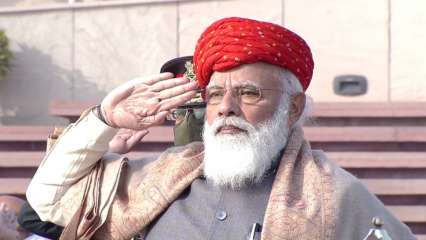 NEW DELHI: PM Narendra Modi continued with his tradition of wearing colouful turbans on the occasion of country’s Republic Day and Independence Day celebrations. This year too, the PM sported a colourful ‘paghdi’ which was gifted to him from the royal family of Gujarat’s Jamnagar. Prime Minister Narendra Modi was wearing ‘Halari pagh’ ( royal head turban ) gifted to him by Jamnagar Royal Family for today’s Republic Day event. The bright coloured turban that PM Modi sported was complemented by a grey jacket and cream coloured shawl.
PM Modi was spotted wearing the colourful paghdi while he laid a wreath at the National War Memorial on the occasion of Republic Day, which has been a low key affair due to the Covid-19 pandemic.

During the Republic Day celebrations last year, the PM had worn a saffron bandhej headgear with a tail. In 2019, he had worn a yellowish-orange turban which had a red tail.

The PM in 2014, the year he took over as PM appeared for the Independence Day in a bright headgear. Prime Minister Narendra Modi has always made a style statement with his choice of turbans during the Republic Day and Independence Day.