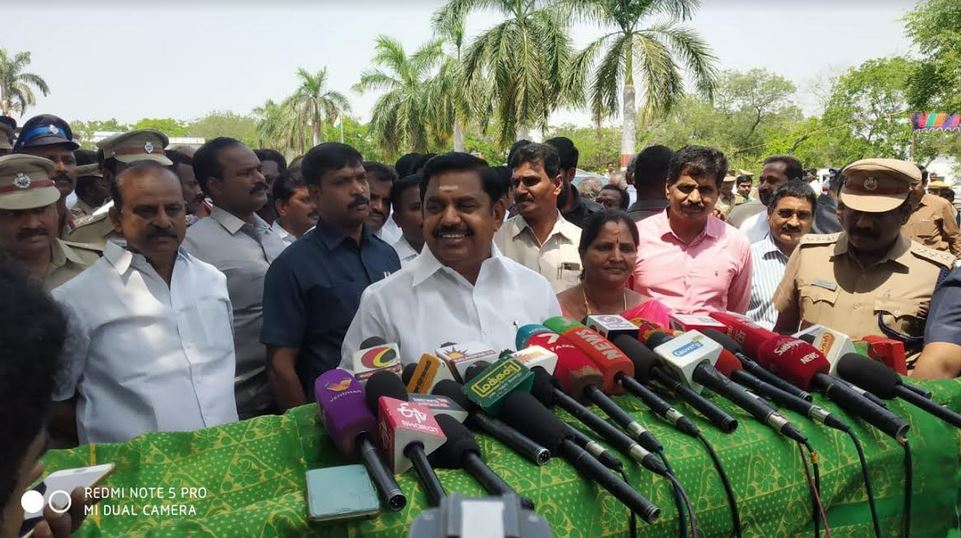 AIADMK will win all four by-poll constituencies: CM in Salem

The chance for winning is bright for the AIADMK in the by-polls to the four assembly constituencies said Chief Minister Edappadi K Palanisamy here today.

Replying to reporters at the Salem Airport the Chief Minister said that the reason behind the by-polls for the four constituencies was quite well known.  “Except due to sudden demise of sitting MLAs of Sulur and Thiruparankundram, in the other two constituencies we have been forced to the unfortunate situation of contesting this by-election due to betrayers of the party,” said the Chief Minister.

As regards the local body elections, the AIADMK is ready always. In the days of Jayalalithaa itself the government had made required arrangements for the local body elections by the DMK stalled the process by raking up some issues in the High Court.Now it has been decided to conduct the elections within three months as per the directions of the Election Commission of India said the Chief Minister.

In a reply to questions on hitch in teacher’s selection, Edappadi K Palanisamy said that selection is based on merit in passing the selection exams as per the Teachers Recruitment Board rules. Though the aspirants were given several chances to pass the exams the Tamilnadu Government is forced to implement High Court order in the matter. Central Government jobs selections are made strictly on the basis of merit and no state government will hinder the prospects for candidates to get selected he said. He stressed that policies and programmes introduced during Jayalalithaa’s period has enabled many students to face competitive exams and clear the same with merit.

As regards opening of the Mettur Dam in time, the Chief Minister said that it will depend on timely rains.

Stating that opposition leader Stalin was employing several tactics to cover up his fear of defeat in the election, the Chief Minister said that the  opposition leader was unnecessarily  getting upset over AIADMK whip’s complaint letter to the Speaker  with proof against  three  MLAs. The DMK MLAs react  to it with impeachment motion against the Speaker. This clearly shows that the three AMMK MLAs and the DMK have a covert understanding and also reveals DMK’s fear of defeat in the election, he said. The DMK leader was resorting to dubious mea ns to unseat the