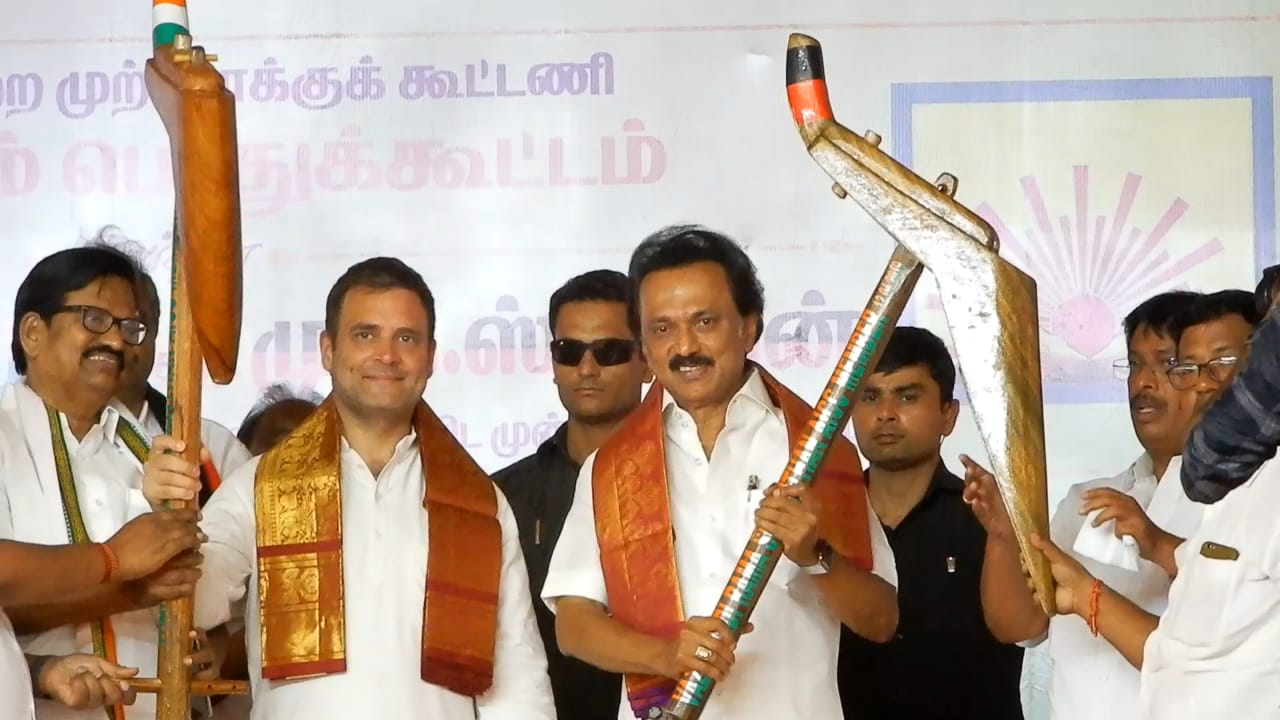 India must be run from its villages, towns and cities, not from PMO’s office: Rahul Gandhi
Salem April 12
Unleashing a tirade on BJP Government and Prime Minister Narendra Modi’s centralism, Congress
President, Rahul Gandhi said India must be ruled from its villages, towns and cities and not from the
Prime Minister’s Office (PMO).
Addressing the public in Salem as part of election campaign for four DMK candidates and one
Congress candidate contesting in the region, Rahul Gandhi said it was the ideology of harmony
between multiple voices and strong preference for decentralism that brought together the parties in
the Congress-DMK alliance. Under BJP rule Tamilnadu was being controlled from Nagpur with the
voice of a bureaucrat in the PMO being more powerful to decide what is good for the state than the
voice of the people. But we believe that the voice of Tamilnadu was fundamental to making of a
strong India and we respect the state’s language, history and culture, he said.
Speaking about the Congress manifesto which he indicated was a product of decentralist approach,
Rahul Gandhi said that unlike the BJP’s manifesto which was made inside closed doors, the Congress
manifesto was a product of discussion with millions of Indians. When the case of dalit girl Anitha’s
suicide due to NEET exams was brought to notice, it was decided that states will have the freedom
to decide whether they needed NEET or not. “We don’t want any more deaths like that of Anitha’s
because of NEET. While we believe in conversation while Narendra Modi and the BJP don’t believe in
that, ” he said.
“One day Modi decided to destroy the country’s economy and demonetised the Rs 500 and Rs.1000
notes. By this he destroyed Tirupur the textile hub of Tamilnadu, Silk hub Kancheepuram and
destroyed the manufacturing backbone of the Tamilnadu. Did Modi discuss the demonitisation with
the textile worker or any one, questioned Rahul adding that he won’t listen to anyone” he
questioned.
Stating that Modi gave away Rs 3,50,000 crores to 15 big companies, he said that the prime minister
had insulted the farmers protesting in Jantar Mantar without granting them an audience. “He is
always seen posing with Ambanis, Nirav Modis and other wealthy people and never with poor
people. Calling the GST as Guber Singh Tax” which fleeced small manufacturers like weavers with
multistage tax with a high ceilng of 28 percent, Rahul said,” when we win we will implement real GST
with simpler and lower levy.
“If Modi can give thousands of crores to Ambani we can give to the poor,” said Rahul Gandhi
explaining the annual direct cash transfer of Rs 72,000 to 20 percent of the population in poverty.
“When we come to power we will survey the poor village by village and street by street. The money
will go to the women’s account and this will be justice for people who suffered for five years. The
model scheme which is first of its kind will be followed by many countries,” he said
Criticising Modi’s Make in India scheme as an empty slogan Rahul Gandhi said that the country was
flooded with Chinese products. We will launch a real Make in India scheme under which young
entrepreneurs will not be required to register for three years. The money given to Ambani will be
taken and given to these entrepreneurs he said. Attacking the BJP government as being reluctant to
fill the 22 lakh vacancies in the Central government Rahul Gandhi said that 10 lakh more jobs will be
created in panchayats and villages. Besides 33 percent reservations in Lok Sabha and Rajya Sabha,
women will get 33 percent reservation in jobs also he said. Stating that the Congress alliance would
defend Tamilnadu’s rich traditions and history, he called upon the people of the state to unite to
defeat Narendra Modi and make him realise the contributions of the state for the country.
BJP manifesto merely a list of dreams: Stalin
The BJP’s election manifesto does not mention what and how it is going to do for the people at
present instead it was list of dreams as that of the 2014 election manifesto said M.K Stalin speaking
to the crowd during Rahul Gandhi’s public meeting today in Salem. Citing examples he mentioned
the targeting of year 2032 to emerge as economic super power, year 2022 for doubling farmers
income and house for all scheme. Calling these paper promises, Stalin said that people have been
misled already by the last manifesto. The Congress manifesto reflects the aspirations of the adu
Tamilnpeople and incorporates many of the promises made by the DMK in its manifesto such as
restoration of rights to states, restoring education in state list, farm and student loan waivers. Calling
Narendra Modi a dictator and Edappadi K Palanisamy as useless, Stalin called voters to remove both
from power for Tamilnadu’s wellbeing. 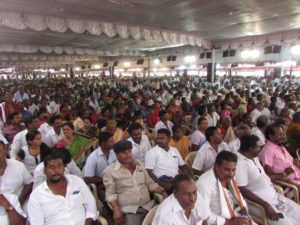 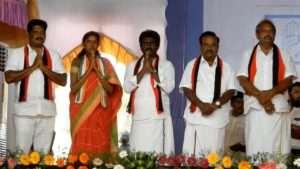